2022 You're Not Alone Youth Camp Thank You

It’s hard to believe I’m writing this, but the 2022 You’re Not Alone Youth Bereavement Camp has officially concluded. This year we had 20 campers join the Community Hospice staff and volunteers for a week of fun, memories, and friendship at Camp Wanake. The campers ranged in age from 7-17. They were divided into groups, with names that went along with the theme “Trekking Our Way Through Grief”. We had the zebras, sloths, elephants, and giraffes.

Every day at camp started with morning announcements and prayer, and the kids’ favorites… donuts!! The fun continued throughout each day, with time for music, art, canoeing, swimming, rock climbing, and more. During music, the kids got to play new instruments and write songs to express their emotions. Art projects consisted of “mixed emotions” canvases, rain sticks, and masks. They also got to decorate their scavenger hunt bags and rocks for the memorial at the end of camp. The kids were incredibly creative with their projects! Service dog Nikki was a companion to the group all week, getting tons of pets and snuggles. The scavenger hunt gave campers ideas on tools and coping skills to help them work through grief.

Lots of friendships and meaningful connections were made throughout the week, as the kids got a chance to connect with others who had experienced a loss. They were reminded all week that they are not alone!

The fun-filled week came to a close with family night. The campers were joined by their families; who got to see where the kids had spent the week and what they had been up to. The kids were proud to put a concert on for their families that featured songs they had written and learned together during the week. There were even a few special numbers/solos. After the concert, we gathered at the lake for a closing memorial service.  A time of reflection and prayer was followed by the kids taking turns launching rocks into the water with a giant catapult. Their rocks were covered in messages they had written to their loved ones.

The bereavement department is so grateful to the staff and volunteers that helped this year at camp! I know I don’t just speak for myself when I say our hearts were greatly impacted by witnessing all that went on during this special week!

ALL families are invited to join us for a fun afternoon at Camp Wanake full of hiking, rock climbing and socializing over a camp fire while we roast hot dogs and s’mores.
Please RSVP by September 12. 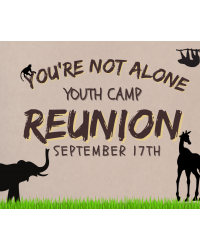 ALL families are invited to join us for a fun afternoon full of hiking, rock climbing and socializing over a camp fire while we roast hot dogs and s’mores. Please RSVP by September 12. (2).pdf